I’m a planner, I can plan most things that happen in my life-however, I stopped planning activities to do since moving to Maryland. I don’t know the state that well and what it has to offer despite living here for almost 3 years.

My boyfriend is from Maryland and is all about activities. In an effort to travel- which I enjoy, and do an activity- which Greg loves, I bought a groupon for a sailing lesson in Annapolis.

I love the idea of sailing. The clothes, the tans, salt water in your face- vacations. Greg loves fishing, and all things Chesapeake Bay, so this activity could be perfect for us both.

We headed down to Annapolis about noon on Saturday, and got to check into our hotel early- SCORE! We changed into “sailing clothes” and had time to kill before the lesson. Greg found a pub to go to, and we walked about 3/4 mile to get there. The pub was an Irish pub, what made it different was the lack of televisions, what made it the same were the Irish whiskeys on the bar shelves, the dark lit space, and the fact we made a friend after sitting down for just 10 minutes.

We enjoyed our beers and conversed with our new friend and then headed out because our lesson was fastly approaching. Now, I had decided to wear a pair of Sperry’s I hadn’t worn in years, and I already had blisters, so I opted to pull the back down and walk on the backs to get to our hotel. Concierge gave me some band-aids and I was as good as new.

It was a short drive (2 miles) to the sailing school and we got there 10 minutes before the lesson started. Now, I had booked this—months ago, 3 months ago. Lucky us, there were HUGE storms coming into the area that evening, so our lesson was in jeopardy.

The sailing school agreed we could go out, but had to stay close in the event a storm came whipping through Annapolis. I was fine with that, let’s be safe! As much as I love the idea of sailing, I don’t know if I have a stomach for it. I was nervous I would be a nauseous, vomiting mess- but I rolled the dice to have fun and at least I would know after this what kind of a water-lady I really am.

Because of the expected storm, the water was choppy as hell. Our sailing instructor Anna was super cool and laid back, practically born on a sail boat, and referred to the water as “white cap city”. I wish I had a cool hobby where I could say one liners like that– *sigh*- some day, dream big Nikki.

Anna taught us about port and starboard sides of the boat, the jib, that our boat wouldn’t tip over because it was built to lean, and the rudder. She also taught us two terms that I couldn’t remember, one was I would loosen my side of the jib, the other was to pull and tighten. I’ll get that next time.

After almost exactly an hour the sky over downtown Annapolis was dark gray and scary, so we made our clunky return back to the school. Because our sailing lesson was cut short, Greg and I will be going back to Annapolis for a part two of our lesson. 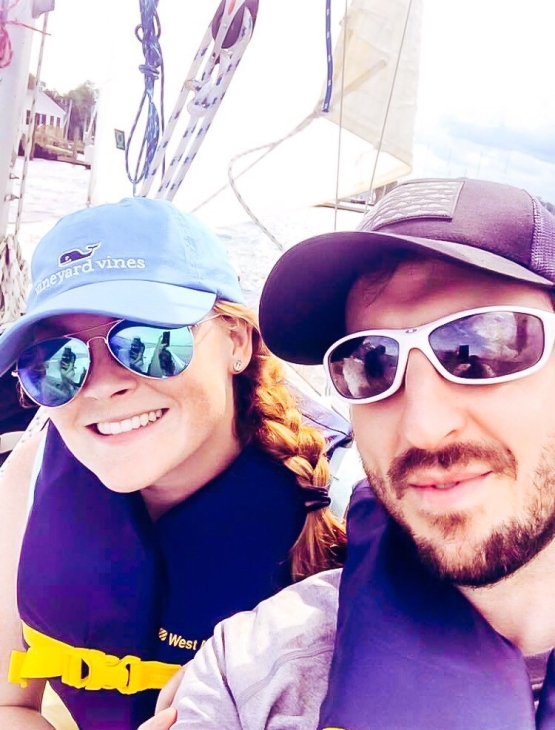 We headed back to the hotel in the nick of time, it started down-pouring once we got up to our room. We cleaned up and started our night out, it was about 6pm. The rain stopped and the air was perfectly muggy- glad I omitted curling my hair.

We went to a couple more bars for a drink at each and decided on dinner down by the water. I got fish and chips and Greg got meat variety platter- lots of meats and potatoes.  Being too full we decided to walk around for a bit and then head back to our hotel to wait for the sun to go down. Being as muggy as it was, having the sun down would make the evening more comfortable.

We headed back out about 9/9:30 and I wanted an ice cream from one of the many candy/ice cream shops downtown. It was a great decision. A milk chocolate dipped waffle cone with marshmallow s’mores ice cream…. totally worth all the cheating! Then we went to a whiskey bar and ordered drinks. I ordered a sidecar, holy crap it was strong!! Even Greg thought it was maybe too strong. Let’s just say…. that was my last drink of the night. We went to a rooftop bar near the hotel for a little bit after that and then called it a night.

Sunday morning! Greg and I woke up got ready and packed our bags since we were checking out later in the day. Once we were situated we took a 1 mile walk to a restaurant Greg found, and that had great reviews. As we walked up to the restaurant we both were amazed at how much it looked like the Key Largo Conch House, in Key Largo Florida. White gravel parking lot, signs pointing in all different directions to cities and countries and a summery paint job on the outside of the building.

My mentality was, I’m on vacation and we walked there so I ordered a mimosa and Greg ordered a bloody mary. To pair with our beverages I got the juevos rancheros, and he ordered shrimp and grits-maybe they don’t really pair together but its so typical of us to ordered these things. Breakfast was great, and we were so full! So we walked to the dock and decided to take a water taxi back to downtown Annapolis. It was a great decision, it was super cheap and nice to feel the breeze on the water, instead of a 20 minute walk in the muggy heat.

Where the water taxi docked, we were right next to the naval academy. We decided to grab an iced coffee (ahh so refreshing, and caffeine!) and walk around the outside as much as we were allowed. Now given it was fourth of July weekend, we decided not go to in, there was a line…so many people. We live close enough that we can make it back another day…maaybbee the day we finish our sailing lesson.

We quickly made it back through downtown Annapolis after stopping in some shops and getting gifts for a few June/July birthdays. On the way back to the car there was an art festival, which normally we love to mosey through for a couple hours, but it was too dang hot to take our time, so we did a speedy/efficient walk through and went back to the car and blasted the A/C. We thought we were done, but then we forgot the maritime museum! It was only a mile away, so we drove there and walked through it. The museum itself is very tiny, I would recommend going if you have kids and need to take a break and go somewhere air conditioned for 30 minutes…tops! 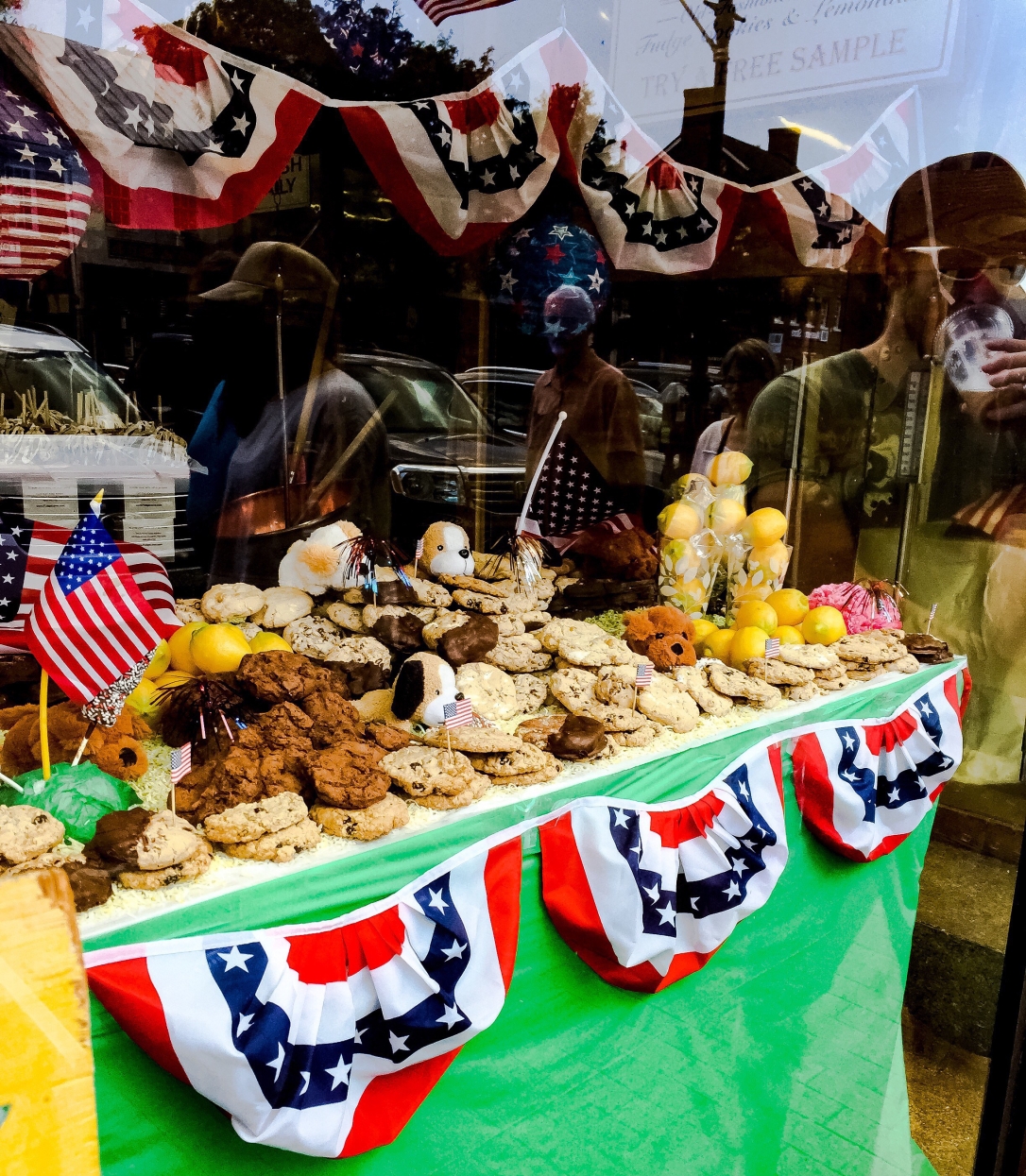 There was a farm stand on the way back, we stopped and got fresh strawberries, radishes, zucchini and sunflowers. I love farmers markets and farm stands, the produce is cheaper, fresher and its nice to buy local if you have the opportunity.

I would say our weekend getaway was great, and I think going for a day and a half and one night is the perfect amount of time for a couple to go. You would go for two nights if you decide to rent kayaks or paddle boards and do those activities. Its a nice walkable place to visit!

View all posts by nikkigingerdz